In NLD there are a number of overlapping signs and symptoms of Savant Syndrome traits and behaviors in some youngsters. Of special interest, however, is the observation and debate about the overlap particularly between NLD and the clinical characteristics of Asperger’s Disorder such as high verbal abilities, compromised motor and coordination abilities and unique social and relationship difficulties. Some argue that Asperger’s part of the high functioning autistic spectrum. Others postulate that Asperger’s is in fact a part of the far end spectrum of Nonverbal Learning Disorders sand point out that as high as 80% of Asperger’s Disorder persons have neuro-psychological profiles consistent with NLD. Perhaps Asperger’s Disorder, instead, incorporates both spectrums. A better understanding of both NLD and Asperger’s Disorder can be gleaned from articles that compare and contrast the two conditions.

Just like there is no single profile of learning disabilities in general, there is also no single profile for individuals whose challenges fall into these verbal and non-verbal domains. Not only does the menu of challenges experienced by those with LD frequently overlap between these categories, but it can also include features of other disability categories such a Expressive and Receptive Language Disorders, Asperger's Syndrome, Pervasive Developmental Disorder (PDD), and Attention-Deficit/Hyperactivity Disorder (ADHD). This is especially true for NVLD, with some researchers and clinicians even hypothesizing that NVLD is a mild form of Asperger's Syndrome. 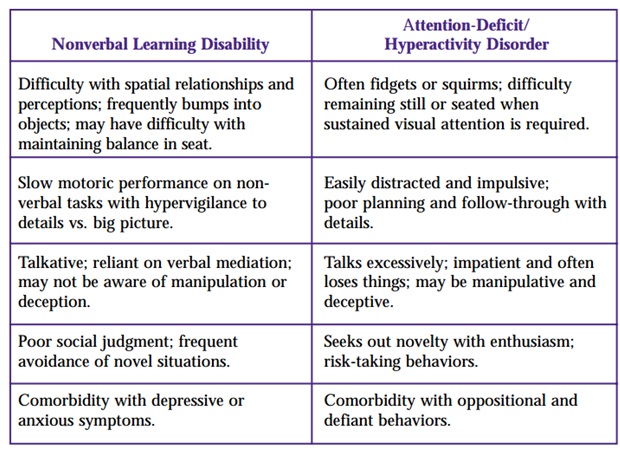 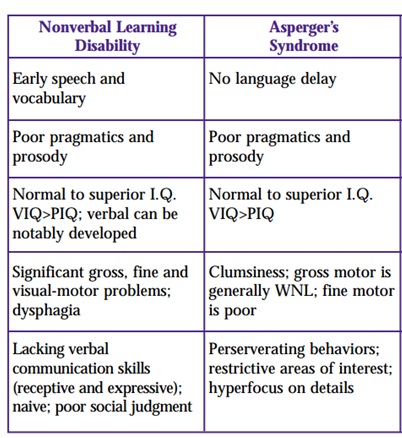