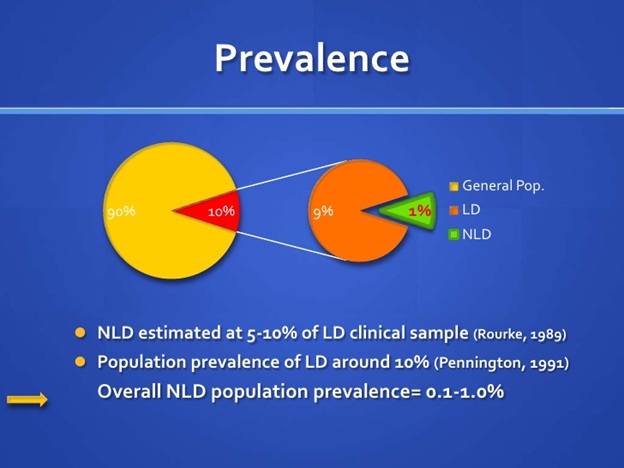 There are no clear numbers regarding wither the prevalence or the incidence of the nonverbal learning disability syndrome. The American Psychiatric Association reported that approximately 1% of school-age children have a mathematics disability (APA,2003). Wicks-Nelson and Israel (2003) suggested that there is “scant information about prevalence and outcome for mathematics disorder” (p.277). The prevalence of NLD has not been reported in research literature. There are also differences between individuals with developmental NVLD compared to those with neurologically acquired NVLD disorders. It does appear, however, that the incidence of NVLD has been on the rise over the past 10 to 15 years (B. P. Rourke, personal communication, September, 1991). Advances in neonatology have resulted in the survival of more significantly premature and potentially neurologically compromised children than ever before. While prematurity itself is not necessarily a risk factor for later cognitive problems (Siegel, 1983), saving more premature infants does increase the pool of potentially at-risk children.
NLD affects the same number of girls as it does boys, and is estimated that approximately 1% of the general population has NLD.